Adrian Mederos 1:19:00 AM
I had to get to California. Flying would be the most painless method. What fun would that be ?
Here is a better idea, why not drive a 19mpg SUV across the entire U.S.!

Meet my car,
She is 14 years old, gets 19 miles to a gallon and leaks oil constantly. Basically the perfect long distance car on the face of earth.


The plan was simple, hit as many national parks and points of interest on the way to California. We would have one week to do the entire trip and finish in L.A. We would leave the day after I graduate at 5am sharp and drive as long as safely possible.

Who on earth would do this trip with me? Meet Zack. Zack is a Mechanical Engineer who has known me for almost a decade. He also happens to be insane enough to volunteer to join me on this trip.

We have planned several trips together before but none like this. This would be the most intense trip yet.

Oh yeah, and to make things a bit more interesting we covered the car in paint. 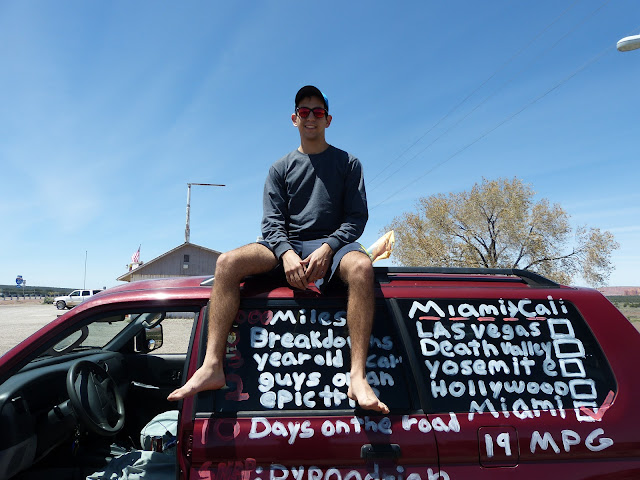 I wrote my Snapchat username on both sides of the car so people we encountered could follow our trip. We also wrote a checklist of the major attractions we wanted to see like Death Valley, Yosemite, Las Vegas, and Hollywood which we would check off as we traveled past.

Finally the time came and we headed out.

This is the first day of snaps.

We drove 24 hours straight before taking a hour break at a truck stop. Then we did the last 15 hour push and arrived into Las Vegas. Total time : 42 hours. We kept ourselves awake by drinking energy drinks and having hilarious conversations. I remember spending about two hours in the middle of the night learning about the different hydaulic fluids in my car from Zack.

Every 4 hours we would stop at a gas station and switch drivers. 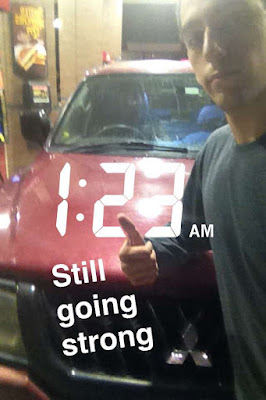 We arrived into Vegas, checked in, ate and knocked out.

We then spent the next day exploring Red Rock Canyon national park and Go-Karting. We passed the beginner hike that the visitor center recommended and ended up doing an advanced hike that was much more interesting. We hiked into a canyon that had large boulders that you had to jump across. The technical term is "Scrambling" and it was intense.


We spent another day in Vegas doing the tourist stuff and gassed up to head toward Death Valley. No more signal from this point on.

When I imagined Death Valley I was expecting a dull massive lifeless desert. Death Valley was anything but, it is truly another world. Just driving in you realize how special this place is. It's covered in mountains and they all have special characteristics. The coolest feature we wanted to see were the Mystique sand dunes. Boy were we not disappointed. 25 mph gusting wind made for an interesting experience.... See for yourself.


From there we found a campground and spent the night. The next morning we headed toward Badwater basin. The lowest point in North America. Named Badwater because of the salt ponds nearby which mules would refuse to drink from.

Our last stop in death valley was a random canyon we found and decided to explore. The echo was great so we took the opportunity to yell at the top of our lungs.

Being satisfied with Death Valley we began to head toward Yosemite. We tried to see Sequoia en route but got lost somewhere when we encountered a closed road. The drive to Yosemite took an entire day but it ended up being very worthwhile.

En route we had one very important pit stop to make. The hype was real.

When we arrived at the Yosemite park entrance the Park Ranger took a good hard look at our painted car and gave us this bad omen...

We parked, and did an incredible hike up the Yosemite falls. Apparently we had come at the right time because the falls were the strongest they had been in 35 years! We took some incredible photos here and I even saw a Bobcat cross my path on the hike.


On the way back from this picture perfect hike the inevitable happen. I walked up to my car in the lot and unlocked the door when I realized that the other doors didn't unlock automatically, and i knew exactly what that meant... Dead battery. Neither of us had remembered to shut off the car headlights that we had turned on when we drove through a tunnel in Yosemite. The result, a dead battery and a car that would not start. Luckily I don't leave home without my handy dandy jumper cables and we hailed down an antique hippy van which started our comparatively space age car. Thanks for saving us hippy van guy.

Next was L.A. Little by little more and more lanes appeared on the highway and before we knew it we were stuck in our first L.A. traffic jam. What a graceful welcoming. We headed toward Hollywood blvd and then to Venice beach.

And just like that the last day on the road trip arrived.

We decided to spend our last day on the road by seeing The Getty. The Getty is a classy free admission museum near Hollywood with great reviews. We got creative here with the photography.