After the event I had the opportunity to meet two characters from IBM. They had an interesting challenge that they were hoping to grant someone. The challenge was to integrate home automation hardware and software for a startup pitch.

The hardware consisted of Centralite sensors and a Jilia hub. They were looking for someone who could innovate and I eagerly volunteered. They decided to trust me with the project and introduced me to Valeria Siegrist, a superstar within the FIU startup community. Together we have embarked on this challenge. I will document the progress of this project on this website.

The box contained A Centralite Pearl Thermostat, Water Sensor, Motion Sensor, Door Sensor and Appliance module. Lastly it contained a Jilia smart hub which would interconnect all of these devices.

The Prompt : Design a solution which involves these sensors, Social Media and Watson AI.

These devices interconnect with IBM Bluemix. Bluemix is a cloud hosting infrastructure which allows rapid development. IBM sent me a 90 day trial. Node-Red is a graphical interface which connects all the sensors together.

I poured into node red and created an instance on my Bluemix account. Kenny York from Centralite was a huge help and I created my first IOT flow. I published this code and an explanation on the Node-Red library here. Basically this program detects when the water sensor is triggered and responds by toggling the Appliance module. This could be a great way to protect an appliance if water is rising or activate an alarm, etc.

After this I started to play with the Watson APIs such as Alchemy, Visual Recognition, and Image training. This was a bit trickier because I had to manually install the Dropbox nodes by editing the code. Eventually I was able to get this example flow to run. 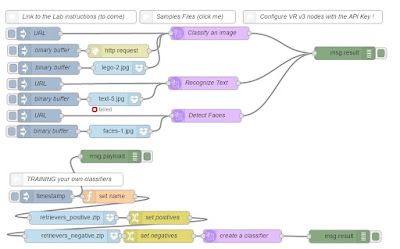 At this point I am more comfortable with the limitations of Node-red and Watson services. Now the question is the problem that we would like to tackle.

So the part that you have been waiting for... Our big idea. We want to create a complete home security solution involving every sensor. The software will have the following features.

For a this project we have proposed the following timeline. We hope to complete this by early October.

This is where we are right now. I'm sure the features will change over the following weeks.