FIU is infamous for spamming student Emails. One email that landed in my inbox turned out to be anything but.

A flyer for a competition in Miami called Startup Weekend appeared. The theme was right up my alley : Fashion Tech. Having dedicated the years prior to my Fashion Tech company I thought it would be an awesome opportunity to attend and compete, especially considering that the event winner would be flown to Poland to compete on a global level.

The first day of the event involves meeting others and selecting a team. I walked around the room introducing myself and got a feel for the skill sets and ideas present in the room. This is when I met Natalie, a talented UI desginer who had a great idea. Her idea was to create a posture tracking solution in order to prevent injuries in her gym. With my background in Electrical Engineering I knew exactly what her idea would require and volunteered to join in her team.

Before we knew it we had a team and the first day was over. I made the mistake of leaving my car parked inside of the lot and greeted a tall dead bolted gate.... This is the day I discovered Uber...

Second day arrives and I begin tearing down a Wii. My idea was to take the on board accelerometer and send the information to an Adruino. I managed to solder pins and build the sensor.
I then wrote code to display the sensor data serially on my Laptop. This would serve as a way to demonstrate that the information could be used to indicate full range of motion.

An awesome company called Makerspace sponsored the event with a 3D printer so I took the opportunity to learn 3D printing with a housing for my sensor.

After a few tries I came up with this design and it worked well.


We decided that for the presentation we would have a demonstration of a squat and show the accelerometer information on my computer to the judges. This would be our proof of concept to illustrate the technology. We explained to judges that a final version would communicate wirelessly.
Lo and behold, the judges were very impressed and we won first place. 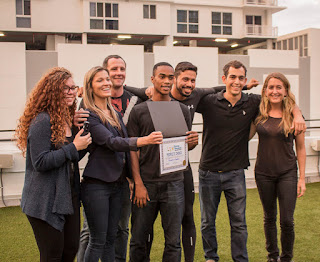 The winning team would be granted two tickets for a round trip flight to Poznań, Poland and accommodation. As the winning team we would represent Miami and compete against other winning teams from other cities worldwide.This would be my first time seeing Europe and I was incredibly grateful and excited.

Read more about my experience traveling to Poland for this competition.


P.s. An FIU reporter wrote a flattering account of my experience and posted it on News.fiu.edu. Read this article to learn even more detail of my perspective on the event.